Ladies Only – Learning To Sail With Other Women 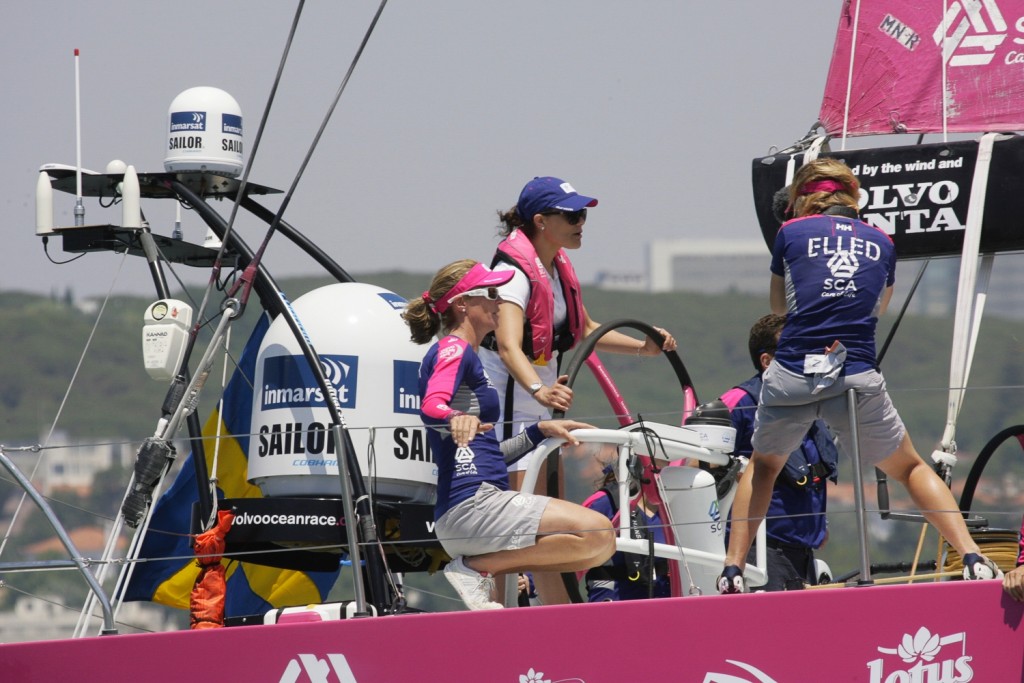 June 05, 2015. Crown Princess Victoria of Sweden onboard Team SCA for ProAm 2 in Lisbon.

Sailing has been perceived as a very masculine sport and this can be very off-putting to a woman who may wish to learn to sail.

Even though there are a number of women who have made it to the very top of the sport (Ellen MacArthur is a household name in the UK) the bulk of top end famous sailors are men. This is somewhat ironic as it has long been held that sailing is one of the most levelling sports of all, with women frequently outshining men in regattas just through their intelligence and tactical ability.

This post will cast a glance at elite racing before looking at various sailing organisations and training schemes open to women only.

The Top of the Sport

Women only crewed Volvo Ocean Race Team SCA made a massive splash during the round the world regatta that ended last year. They trailed behind for most of the legs, but their social media and publicity campaigns were brilliant, and as a result they were one of the most popular teams in terms of fans in the race.

One of the reasons cited for them not doing so well was the lack of women who are on the big boat ocean racing circuit. One of Team SCA’s aims was to help change this by inspiring women who enjoyed racing to consider this form of racing as a career path.

It also put over 30,000 miles of ocean racing under the belts of the crew, making them some of the most experienced ocean racers on the circuit in one hit. In theory, with the bulk of the experienced crew on the next race, they will have a better shot at being good competitors with that experience – if of course they can find a team sponsor, after SCA dropped them recently.

In mainstream school education, some people argue that where boys do as well in mixed settings as they do in boys only classes, girls and women excel in women only classes. It comes down to the idea that boys in many cases will shout down the woman or girl to get their answer to the teacher.

Masculinity is often about being the best and showing off about it. Women can be the same amongst each other but like to choose their battles so will quietly step back if competing against men. As adults, let’s face it, men often see women as a way of rebalancing their hormones! Culturally, women together can have lots of fun and come out of their shells when men aren’t in the mix.

Searching on Google, there are a large number of women’s sailing organisations across the US where women can enjoy sailing together without the complications of men getting involved. If you’re a woman interested in learning to sail one of the first search terms you should put in is ‘WOW – women on water’, and you will see groups in the US, UK, Australia, and Canada on page one of the search.

These may well be ladies’ nights at a club but other searches will show the Women’s International Match Racing Association (WIMRA) that is designed to advance women’s match racing on the world stage.

One of the Team SCA members, Sally Barkow, was a serious contender for the US Olympic women’s match racing team – I watched her getting narrowly beaten in early 2012… In the US, look up the National Women’s Sailing Association to get sailing with other women.

Where Can You Learn to Sail with Other Women?

Along with the sailing organisations there comes training.

Sailing as a mixed group, men will naturally gravitate to the more physical roles like trimming the sails, but also the more showy roles like helming ‘to be in charge’… Again, the dynamic can be different in a women only crewed boat, where instead of competition you will see cooperation to achieve similar aims – this is again forgetting the hormonal imbalance many men have!

In California in February there will be a convention for women to see about learning to sail in the USA. Have a look at the Women’s Sailing Convention in Corona del Mar, CA.

In the UK there is a dedicated women only sailing school called Girls for Sail, that takes women of a range of abilities – you may want a sailing experience holiday or to get some race training in. This company gets people sailing all over Europe and further afield, so you don’t have to wrap up in foul weather gear for a windy weekend on the Solent in June, but can sail on the Med with your mates instead.

Ladies, What are you Waiting for?

Have a look around our website to find sailing courses near you, and search Google for women’s only sailing courses, as you may well take more from such a course than you would in a standard, mixed environment…