Offshore Sailing – The Great Leveller Between Men and Women

Posted on February 23, 2015 by Richard Shrubb under navigation, Passage Planning, Yacht Racing Comments Off on Offshore Sailing – The Great Leveller Between Men and Women

In previous blog posts we have looked at how disability shouldn’t be an issue preventing you from competing among the best. This post will look at how women have routinely out competed men in offshore sailing –  when racing offshore, it really doesn’t matter what gender you are, just as long as you can outfox your competitors.

If you’re frustrated by the male dominated world ashore, with so called ‘glass ceilings’ and other obstacles, old Neptune has the best equalities policy in the world.

In ocean racing, anyone can win. If you learn to sail the best route between a-b then there’s nothing stopping you due to your gender. 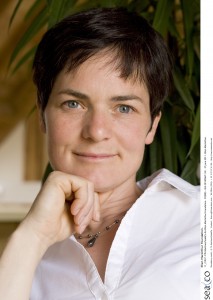 In 2005 Ellen MacArthur raced her trimaran B&Q Castorama around the world at an average speed of 15 knots, and broke the world record for a solo circumnavigation. She received no outside help, and only succeeded because she was better than everyone who had preceded her!

She’d raced in the solo circumnavigation race the Vendee Globe twice, in her IMOCA 60 Kingfisher where she came second in 2001.

The 24 year old was racing the best men in the world, yet her strategy ensured she would come home labelled one of the best sailors in the world, full stop.

Ellen MacArthur proved to the world that as long as you’ve the focus and ability, there really aren’t the barriers against competing you see in other sports. Where in the 100 metre sprint in athletics, women’s physique prevents them from running anywhere as quick as men at elite level, this isn’t a barrier in offshore sailing.

This boat is currently racing around the world on the Barcelona Race, a race of IMOCA 60 yachts crewed by two people per boat.

GAES Centros Auditivos is crewed by a mixed pair, 38 year old Anna Corbella and 32 year old Gerard Marin. As of today they are lying third in the race of 7 boats, and as things stand could well end up on the podium when they get to the finish line in around 8,000 miles time. This mixed gender crew is up there among the best…

Sailing isn’t about brute strength, certainly when you’re racing around the world! The winner is generally the best tactician.

If you can read the path of a weather system and get into position just in time to get the best winds in the fleet, then you could have a 5 knot boat speed advantage over your competitors. There are other skills too.

Over a 30,000 mile race there will inevitably be breakages, and knowing how to repair them very quickly yet to the same integrity as anyone else, could save you a place in the race. Trimming the sails correctly could achieve a 1 knot advantage over your competitors. 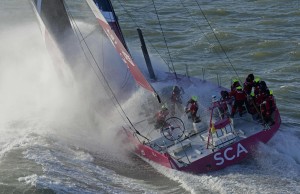 Those following Team SCA in the Volvo Ocean Race may ask why they are struggling against the men?

There are 11 women on the boat as against 8 men on each of the men’s boats – there shouldn’t be a strength disadvantage. The boat is identical to the other 6 in the fleet, and was the first to be delivered to any team, so the women have the most experience on this particular boat.

People on social media have pontificated and postulated all sorts of reasons for the women coming last on all but the first leg, when tactics got them into Cape Town before Spanish Team MAPFRE.

Alan Block is the editor of the world’s top sailing blog and forum, Sailing Anarchy, and was interviewed for the Volvo Ocean Race’s Inside Track last week. His view is fairly simple:

“Big boat, crewed offshore racing is the team’s big weak point. Yeah, they’ve got plenty of inshore one design experience, with some great drivers and great trimmers… They lack the experience level of saving a minute here, two minutes there when there’s a transition of repair. See how fast these guys with five Volvos under their belts jump to it, whether the J1 halyard took 20 or 40 minutes longer to fix than it did on another boat…?”

In short, though in the current race those following Team SCA will probably have similar feelings to the women aboard – “the Dunkirk Spirit” as it is known in the UK, in future races the team members will know how to minimise downtime due to repairs and keep up with the fleet.

It really says it all that they took a really ballsy tactic in this current leg that could have even won the leg altogether, by leaving the fleet and taking a much longer route to take advantage of better winds.

Where they lost out was an identical issue that has beset the rest of the fleet on this leg, with a halyard failing. It happened to everyone else, and where all the other boats were down for minutes, Team SCA were down for longer.

Due to their tactics at the beginning of this leg to Auckland, New Zealand, there is a significant chance they won’t come last.

In future Volvo Ocean Races? The boys better start looking out as the women will continue to prove that ocean racing is as much a game of the mind as it is of the body.