The Rise Of The Inflatable Boat In Modern Sailing Circles

Posted on June 17, 2013 by Lee under Boating, Uncategorized 1 Comment 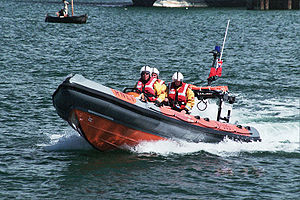 Rigid-hull inflatable boats have been used in the mainstream for decades –  they’re a versatile class of vessel, and they’re suited to a number of roles.

In essence, rigid inflatable boats are powerboats, fitted with inflatable tubing around the sides of the hull. They’re useful for several different tasks, and are subject to growing demand as both utility and leisure craft.

The first use of rigid inflatable boats dates back the 1960’s, when a British Rear-Admiral replaced the torn hull of an inflatable rescue boat with a wooden sheet, as part of a research and development program.

The design was subsequently iterated and refined, until the deep-vee bow version was unveiled and patented in 1969, and the first commercial boat was launched shortly after. The deep-vee hull with inflatable tubing is the design basis for all rigid inflatable boats in use today.

Rigid inflatable boats are usually around ten to thirty feet in length.

The boat consists of two main sections – the v-shaped hull, and the inflatable tubing secured around the gunwale, sometimes extending all the way back down the length of the boat. They’re powered by either an outboard or inboard motor.

The hull can be made from a variety of materials, but wood and metal are the common. Many modern inflatable boats have hulls made of wood combined with glass-reinforced plastic.

The tubes are usually built in sections, and each section has a valve in place to allow the addition or removal of air. The sectionised structure mitigates the potential impact of a puncture – the more sections present, the smaller the proportion of tubing that will be rendered ineffective if a puncture occurs.

Being small, high-powered motorboats, they share many of the properties of standard powerboats. They’re very maneuverable, with good acceleration, high top speeds and a small turning circle.

The inflatable tubing adds a high level of buoyancy to the vessel, and they’ve been called “unsinkable” by many.

The tubing also serves a second purpose – it protects the boat from damage should they collide with another vessel, at least at low speeds.

In fact, due to the inflatable sides, rigid inflatable boats are notoriously hard to sink. They will actually stay afloat even when almost filled with water.

What Are they Used For?

Their “unsinkable” nature makes them ideal for high-speed action on rough waters – and it’s why they’re extensively used by as lifeboats and coastguard and military vessels.

They also make great racing boats, as they retain all the speed and acceleration of a powerboat, but with the added safety afforded by the inflatable tubing.

There is also a sizable leisure market for inflatable boats, and they’re becoming popular as a standalone purchase.

Yacht tenders are used to transport crew, passengers and supplies. They can serve as speedboats for watersports like waterskiing and wakeboarding, and they’re also perfect for quickly zipping off and exploring an island or bay, should that take the passengers’ fancy.

With any luck, that’s given you a solid overview of the rigid inflatable boat and its many uses. Stay tuned for more schools and courses coming up on The Boating Hub!