Posted on October 23, 2012 by Lee under Sailing Comments Off on Popular Sailing Superstitions And Customs

Do you know where the expression ‘Son of a Gun’ comes from? If you’re a sailing or boating enthusiast then perhaps you should, because it refers to a child born on a ship or boat. Apparently it’s supposed to be a sign of good luck, although that does rather depend on the circumstances I imagine.

But this is just one of many superstitions relating to boats, sailors and the sea, and it made me wonder just how many there are, what some of the most popular ones are, and whether you, loyal and avid readers! have any superstitions yourself.

Certainly as far as I’m concerned I don’t have any superstitions I hold to religiously. Apart from wearing my lucky socks, turning round three times before boarding, knocking back three quarters of a shot of whisky while dancing naked under the moonlight with a black cat who’s walking backwards under a ladder being held up by two magpies. All of which severely limits my available sailing time.

Anyway, here are some of the popular seafaring superstitions you may have come across, but if you feel I’ve missed any particularly good ones, please do feel free to share them, and if you have any odd quirks yourself when it comes to sailing, we’d love you to share them with us! 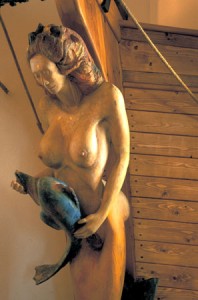 Sailing Superstitions Before Setting Off

There are many different customs and superstitions relating to sailing which are supposed to be carried out before you even set sail. One of the first rules which I’m sure you will have heard of is that you should never set sail on a cruise on a Friday. This is a bit unfortunate if you were hoping for a long weekend, but the tradition stems from religion, since Jesus was crucified on a Friday. Another day to avoid is the first Monday in April, which was when Cain murdered his brother Able.

A long held superstition is that you should avoid anyone with red hair when setting off on a journey by sea. Exactly how the Vikings managed I have no idea, but there is apparently a ‘get out’ clause which states that it is safe to embark on a sailing journey with a redhead as long as you speak to them before they speak to you. Again, how exactly this is going to work if you and your partner are both red haired and are looking to set off for the weekend I have no idea.

Also, before you set sail you should spit in the ocean, throw coins into the sea and pour wine on the deck. As if boating wasn’t wet enough.

Cats bring good luck, so bring Whiskers along with you, and according to sailing legend tattoos and piercings are supposed to ward off evil spirits. So your college children are likely to be very welcome after all.

Finally, make sure you nail a figure of a naked woman to the bow as it is said to calm the seas. If her eyes are open then she will also help guide you to safety. Although whether your wife will see it that way is a matter for you to ponder.

Sailing Superstitions Whilst At Sea

Remember that whilst at sea no one should whistle, as this is not only bad luck but will cause the weather to turn foul. This is actually where the expression to ‘whistle up a storm’ comes from.

As well as refraining from whistling when sailing you should also make certain you do not cut your hair or nails. The reason for this is that cut hair and nails were used by the Romans as offerings to Proserpine, the goddess of the infernal regions (possibly Hull, I’m not sure.) By cutting your hair or nails at sea Neptune, the god of the sea, would be angry at having another god’s offerings made in his domain, and he would punish those sailing in his waters.

The expressions ‘touch wood’ and ‘ship shape’ both come from shipping too, as sailors used to knock on the wood to detect wood rot. Although if your ship is that rotten there’s a good chance that banging on it isn’t going to help much.

Finally, avoid black travelling bags when sailing, flat footed people and flowers (because they will be used as a wreath for the inevitable dead. Cheerful lot, sailors.) If you have a silver coin, wedge it under the masthead for a successful voyage, and if you can steal a bit of wood and mortise this into the keel your ship will go faster. Or sink. Take your pick.

So have you got any favourite nautical superstitions? Anything you always take, always do, always avoid or refuse to do before or during a sailing trip? Do share your personal foibles!