Why Learning Both Inshore & Offshore Sailing Makes You A Better Sailor 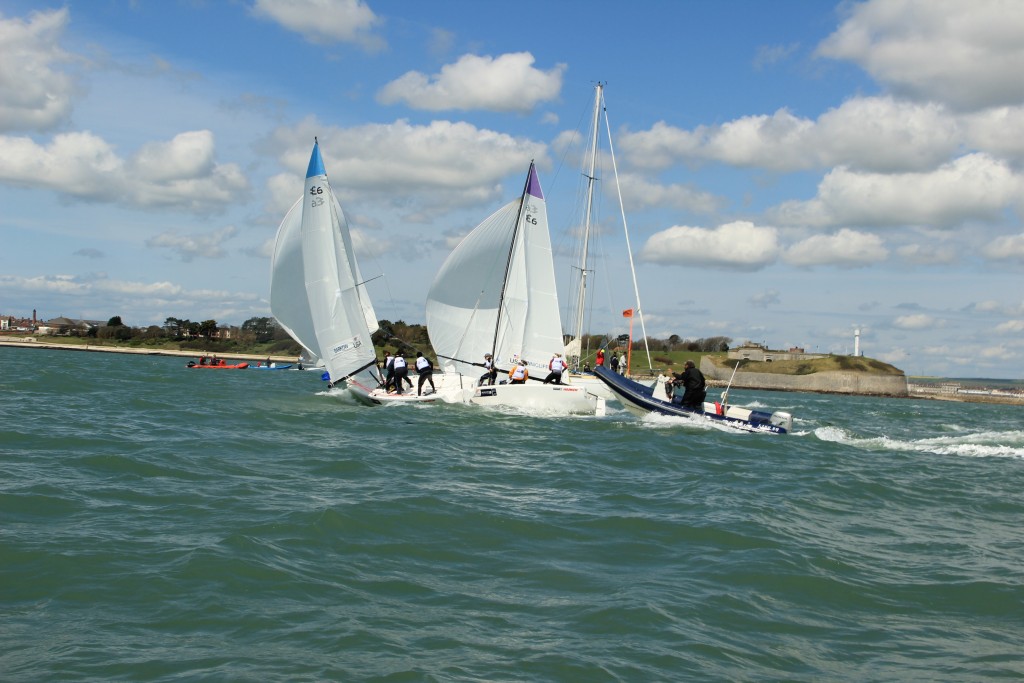 Who broke what rule when? Team racing at its finest…

There are two forms of sailing – inshore racing and offshore sailing.
To be the best sailor it helps to gain experience of both as they compliment each other. This piece will look at what you will get out of each type of sailing discipline and why learning them both together, you will be a better sailor for it.

The ultimate round the buoys and back for tea racing is the America’s Cup. It can be extremely competitive.

“Your best friends are your competitors because they’re the ones who are going to haul you out of the Southern Ocean. In the America’s Cup your competitors will bury you – legally or any other way they can.”

The same does apply even to some club racing series, with some people so competitive in some cases they’ve been known to throw punches after a race for another boat’s rule infringement that cost them the race!

This shouldn’t put you off though – there is more to life than a bit of silverware. Round the buoys inshore racing teaches you how to sail better than offshore cruising and helps you to gain an intimate knowledge of collision regulations. Let’s look at this first.

Inshore racing is about getting every last half knot out of your boat from a given wind direction and strength. You learn to trim your sails and helm to a very high standard. The further up the fleet you stand, the harder you push too, and your focus is entirely on sailing your boat to its very optimum.

Collision regulations are not something people who cruise are very attuned to as you tend not to be in close quarters situations all the time. Yet what if someone is coming at you with the wind over their left (port) side and the wind is over the right (starboard) of your boat? In racing you hold your course and if the get too close you shout that you have right of way (“STARBOARD!”). Collisions do happen but the person infringing the collision regulations may end up reaching for their wallet to pay for the damage to your boat.

What about offshore coastal cruising then?

Coastal cruising uses many of the skills in offshore racing Grant Dalton referred to. You learn to navigate in the classroom, as well as boat maintenance, passage planning and a whole range of other skills. It is about being self sufficient at sea. You will probably end up problem solving in order to get home from time to time – limping home isn’t unusual in a sailor’s career, and the subject of many a salty tale.

You will learn more seamanship than you would blasting around the buoys and this in turn can up your sailing skills as an all rounder.

Two tales of how racing skills got me home…

At school I sailed twice a week on dinghies in all conditions. From this I learned how to sail very well without an engine, and this would save a mate thousands of pounds by getting his yacht home without an engine one day.

In my late 20’s a friend took me out on his yacht for a day sail around the Bay of Roses in Spain, only to run the battery flat keeping the beer cool in the fridge. We needed the battery to start the engine and the Tramontana was building from the direction of our harbour. Short tacking is where you tack through the wind until you have enough momentum to get through the next tack, and you slowly sail as close to the wind as possible. To my friend’s amazement we short tacked right into the harbor entrance where I could put him ashore to phone a friend to tow us into his dock.

Equally, after nearly a decade without sailing, I went out on the dinghy club’s Topper Pico in a gale. The old men of the club told me afterwards they expected me to spend my time upside down… But no, from lots of experience sailing in snot, I just spilt the wind in every gust or luffed up to lose the wind. Better for the sails to flap than end up in the drink!

Qualifications to make you a good all rounder…

Want to be a good all rounder? It is worth looking up your country’s cruising qualifications, which will include classroom based navigation skills as well as the odd week putting theory into practice. Dinghy sailing will teach you how to sail brilliantly, so do consider doing some dinghy, keelboat or multihull racing qualifications. In learning both disciplines, you never know which set of qualifications will get you home one day!