Team Vestas Wind Hopes and Dreams Wrecked – What Can We Learn? 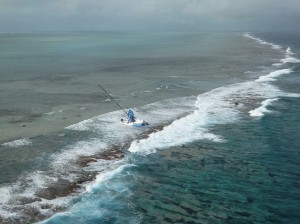 With thanks to Volvo Ocean Race

The Danish Volvo Ocean Race competitor Team Vestas Wind hit a reef near Mauritius in the Indian Ocean and has been abandoned.

The vessel hit the coral reef at around 15 knots, and the stern was jammed on the reef, the impact having broken off her two rudders.

The crew abandoned ship before dawn as the yacht broke up on the reef. This is a terrifying and sad experience sailors have faced throughout history, and thankfully no one was seriously injured or killed.

Though there will be a formal investigation as to why the boat hit the reef, the recovery and rescue situation has been excellent. Though there may well be a need to apportion blame for the accident happening in the first place, the fact that everyone is safe and well is something to be applauded.

This piece will look at three aspects of the event that did go well, and as a result have reduced the number of accidents.

The Volvo Ocean Race fleet had just sailed though a tropical storm as they headed north from Cape Town to Abu Dhabi in the Arabian Gulf. The racing has been very close, with boats never more than a couple of hundred miles apart – and this due to the tactics of the skippers and navigators, not due to dissimilarities between boats and crews.

Being a ‘One Design’ fleet, this ensures that serious incidents can be dealt with quickly.

In previous editions of the round the world race, there have been design and performance differences between boats that have meant that while the best built boats have screamed ahead, the worst have lagged behind.

If Vestas had been a back marker due to its design differences with the rest of the fleet, help could have been 1000 miles away. As it was, Team Alvimedica was called off the race to help from only a few hours away. Once the crew made it to safety, Alvimedica rejoined the race and is now in 5th position of the six remaining boats.

In 1979 a massive storm hit a fleet of yachts racing on the Fastnet Race off the UK. Several boats were abandoned unnecessarily and crews died while in the life rafts.

Reports from the Vestas accident say that the yacht was right in the surf line and was being pounded by large waves onto the coral reef. The skipper Chris Nicholson held on until there was no option but to escape to the rafts. He really wanted to wait until the vessel had been pushed right onto the reef after dawn (so they could see clearly), so the crew could get ashore without the waves smashing their bodies onto it, potentially killing them.

In the event Vestas was so badly damaged and the risk was so great by staying aboard they had to abandon before dawn. The other Volvo Ocean boat was nearby in case an emergency rescue was necessary – again the general rule is that the bigger your boat the safer you are. 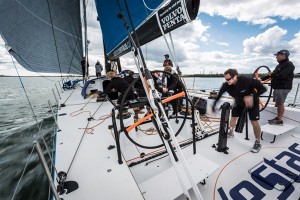 There have been incidents in other races where keels have been knocked off by hitting underwater floating objects. The boat would capsize in seconds.

This is a typical accident where only being trained previously can save lives. One second you’re on the winch, next you’re under water working out what the hell happened and fighting for your life.

In the Vestas case not only were the crew supremely competent in survival at sea situations, but they had plenty of time to get their ducks in a row with regard abandoning.

As shown previously, they wanted the boat to remain afloat but this was beyond their control. As the hours passed, the crew practised the abandon ship operation, whilst making the vessel as safe as possible. The practise and previous training ensured an even greater chance of success.

If you plan on doing something very dangerous for a hobby or sport, even if not pushing a multimillion Euro 60ft carbon fibre racing machine to the limits around the world, it helps to know what you’re doing even in emergencies. Bluntly, if the skipper and crew on Vestas only knew how to sail a boat but not how to save their lives in this dreadful situation, the tale told would be far different.

If people died at sea as infrequently as they do in space, such accidents would be headlines around the world. Only the worlds yachting press reported on this – no major mainstream press picked up the story.

The fact is, the sea is a dangerous place to be. By respecting it, you may be able to tell your tale in the bar afterwards. Indeed, the crew aboard Vestas won’t have to buy themselves a beer for quite a while!

If you push too hard, go beyond your limits, and end up in a situation you’re not trained to handle, there is a serious risk you won’t get to the bar to tell the tale at all.