Learn to Sail and Yachting Etiquette

Posted on October 22, 2013 by Lee under Sailing Training Courses Comments Off on Learn to Sail and Yachting Etiquette 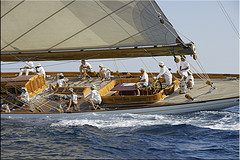 Learn Sailing – A Life on the Ocean Wave

If you’ve been bitten by the bug to learn sailing then “welcome aboard” as the old nautical expression goes. You’re joining one of the longest established and most deeply satisfying clubs in the world. Whether you one day intend to enter into competition, or you simply want to go sailing for pleasure, you’ll find it to be one of the most rewarding and enjoyable sports, hobbies or pastimes that there is.

Dotting the “i”s and Crossing the “t”s

But whatever type of yachtsman or woman you want to be, (a Sunday sailor or a transatlantic traveller), when you learn to sail you also need to learn yacht etiquette; what you should and shouldn’t do, what’s acceptable and what isn’t, and what is expected of you when you’re aboard someone else’s boat.

Now we’re not talking about the right of way, or tacking procedure, leastways not here in this particular blog; we’re talking etiquette. You can learn all that “technical” stuff when you enrol on a RYA training courses. No, we’re talking about behaviour.

Yachting is over 300 years old, and during that time it‘s built up its own code of behaviour, its own traditions and etiquette. Lots of people come into “new money” and decide to buy a yacht. I hesitate to use the word investment, because if you already own a yacht, you’ll know just how expensive they are to moor and maintain, and that’s even before you’ve set sail!

The “Hooray Henrys” (no offense to anyone called Henry) tend to learn to sail and yachting etiquette as part of their upbringing; but for the “new money” folk, it’s like more like learning a foreign language. So for all you lottery winners, and poor boys and girls “done good”, here’s a quick dunking to soak up, as part of your learn sailing routine.

If you’ve been invited onto someone else’s yacht you should always ask permission to come aboard. Yes, in effect you’ve already been invited when you were asked, but that’s not the point. You don’t have to be overly formal when you ask the question; but a simple “May I come aboard”, or “Is it okay to come aboard” is both the correct and the polite thing to say.

In some countries it’s traditional to remove your shoes before going into somebody’s home. Well it’s similar when you climb aboard someone’s yacht. As you’ll find out for yourself it takes an awful lot of care and hard work to look after the deck. High heels are a definite no-no, as are ordinary shoes too. Ideally you should take your shoes off (whatever type they may be), or at least ask your host if it’s okay to come aboard in whatever shoes you have on. Your courtesy (and knowledge of etiquette) will be appreciated. However, do also invest in some deck shoes, it’s what they’re made for, after all.

It’s also traditional to wear white on yachts, and if you’ll actually be sailing, those whites should be comfortable, non restrictive, and be capable of getting wet and drying off quickly without damage. Things tend to be a little more informal these days, so if in doubt, check with your host. One thing’s for sure though – you won’t go wrong wearing whites.

One of the things that true yachtsmen and women love about yachting is being out there in Mother Nature with just the rustling of the sail, and the slip-slap sound of the hull smacking against the sea. Loud noises such as music and raucous behaviour are simply not acceptable. Respect other people’s privacy and their right to a noise pollution free environment.

If you don’t already know, the toilet aboard a yacht is referred to as “the heads”. They can be quite temperamental so if you are in any doubt as to how to operate the on-board loo, ask the owner or a member of the crew. The worst thing you can do is clog it up!

Last, but not least, always obey the skipper. If you’re out and about on a charter, or simply out on a quick jaunt along the Solent, the skipper is responsible for the health, safety and well being of everyone on board. You’ll make his/her job a lot easier, and help to keep everyone aboard safe (including yourself), if you do as you’re asked. Aye, aye captain!

Whatever training course you decide to take, (and we’ve got a great choice on the Boating Hub), you’ll sail with greater panache, and you’ll be better appreciated by your yachting peers if you know how to behave properly.

We cover all bases when it comes to all things nautical, from motor boat courses to online boating courses to cover the theory so check out what’s available for you now.