Learning To Sail In Challenging Conditions – A Better Way To Learn?

Posted on August 3, 2015 by Richard Shrubb under Boating, Sailing, Sailing Courses, Sailing Training Courses Comments Off on Learning To Sail In Challenging Conditions – A Better Way To Learn? 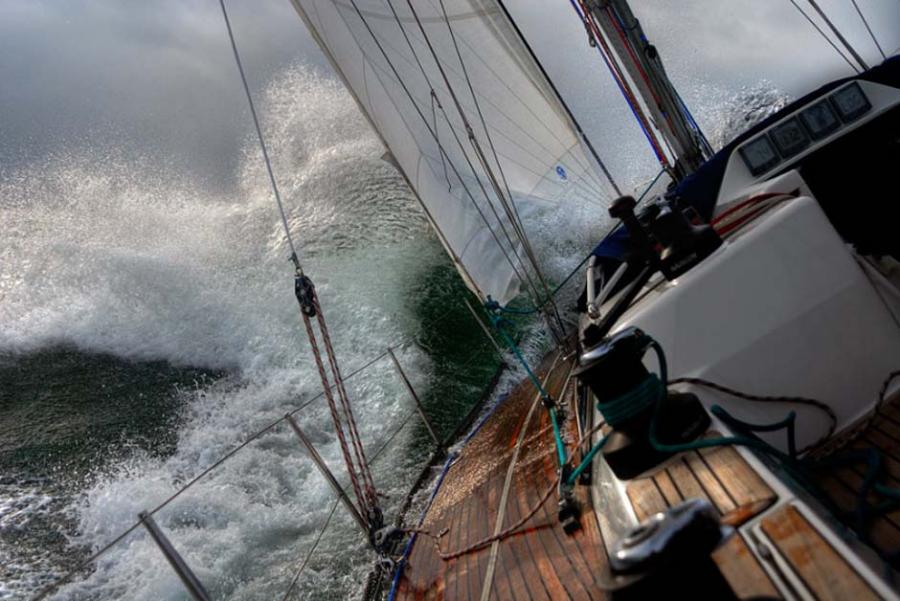 Not every developed sailing nation is as large as the USA, where devoted sailors can head south for the winter as ‘Snowbirds’.

Most of us have to put up with the climate we have, and for northern European countries and Canada, this means we will have to put up with long periods of snotty weather. Not everyone who lives in the NE of the US can move south to Florida anyway – the world of work keeps us in one place most of the time…

Learning to sail in autumn / Fall is arguably a better time of year to learn to sail anyway. Why? You will learn more from being in stronger winds and challenging sailing conditions than if you’re on a glassy sea with the odd zephyr tickling you along…

The Snowbirds head to Florida

There are a large number of people in the US who have two homes – one in New York and New England and the other in Florida.

Rather than have to deal with 30 feet of snow in a typical winter, you get spring like conditions most of the later part of the year in your southern home, excepting the hurricane season of course!

Really, in that part of the world, other than August to October when the big hurricanes come in from the Atlantic, you don’t want to be in Florida in July and August anyway – it is lethally hot and there isn’t much wind. What with the economic powerhouse of the NE, you can work in comfort in summer in your northern base and head south for the winter.

Europe has its own brand of Snowbirds, with many people having homes on the Mediterranean coast, and only a few hours’ commute from their bases in northern France, the UK, Germany and Poland. Arguably, sailing is less tricky with fewer major storms on the Med, though do be aware of the Tramontana and Mistral that beset the Golfe du Lyon – these can hit 80mph and be around for a week or longer…

Not everyone can afford two houses!

For most sailing types, the second most expensive thing they own isn’t a villa in Spain but rather their yacht.

In northern Europe, we are limited as to when we can sail, with the Atlantic conveyor chucking gales and storms at us almost on a weekly basis between late September and mid March. Even in mid summer we can be nailed by a big storm… This is why it may well be a better idea to learn to sail in autumn or early Spring.

What? Sail in bad conditions!?

There are a number of good reasons to learn to sail in challenging conditions.

With an instructor you’re in safer hands. In order to get an instructor’s qualification you have to be very experienced in sailing in most conditions. For those with less sailing experience getting out there and being shown how to sail a boat in big winds and rough seas, the instructor will be able to make the ultimate judgement of whether to go out or not, and what safety precautions to take.

I did my Day Skipper Practical exam in Force 7-8 winds on Torbay. We foreshortened the course as it was blowing Gale Force 8, gusting 10 from the south on the outer edge of the bay, which would have put us in danger should we have attempted to head back to Dartmouth.

Experience is everything. I have sailed in a Force 10 and several times in winds of over Force 7. Honestly? I prefer to be ashore watching yachts in those conditions than being on one of those yachts being watched! On a yacht, Force 8 winds are survival conditions, and with everything flying about, people being sick and the crew having to focus on getting to the nearest safe harbour? You just have to perform or lose everything.

You can’t predict when the next storm is coming beyond a week’s time. Weather forecasting is extremely accurate but even now a 5 day forecast is as accurate as a 24 hour forecast in 1987 when BBC weather presenter Michael Fish decided that the worst storm of the century wasn’t going to hit the UK – it did and people were killed.

If you’re sailing for two weeks? You have to be aware that something nasty may hit. In order to do that, you need the experience of what to do in those conditions, and what better way to get that experience than to be under the tutelage of an expert who’s seen it before?

What will you learn in challenging conditions?

You will probably learn that Gale Force conditions may look fun when watching the Volvo Ocean Race on your iPad, but certainly isn’t in practice!

You will learn how to get everything stowed away well so you don’t get hit on the head by a flying teapot when going below to check your position.

You will be taught how to deal with seasickness (whether yours or someone else’s) and what safety precautions will get everyone home in one piece.

You will also learn to be safe when in a stress situation, and importantly, how to sail and manoeuvre when the conditions are severe.

Overall, you will learn how to get to the pub and tell the tale over that delicious cold pint that night, rather than be a sad story people in the same pub share the next evening…