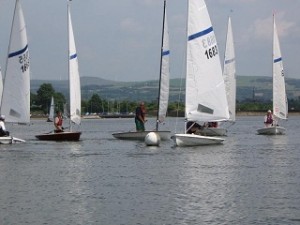 Essentially, inland sailing means sailing on an enclosed body of water such as a lake or reservoir.

The term is doesn’t generally refer to boating on waterways such as rivers or canals, which are generally more suited to motorised vessels, largely because they don’t receive the winds necessary to support sailing at consistent speeds.

So Why Sail Inland?

Inland sailing is a great alternative way to spend time on the water.  And it has a couple of advantages over sailing on the open seas:

Convenience. Although it would be lovely, not everyone can jet off to the Mediterranean at a moment’s notice.  The UK is host to several large bodies of water such as Lake Windemere, and chances are you’re not more than two or three hours’ drive from a big lake or reservoir where you can rent boats from small dinghies to larger cruisers.

Safety. It’s no secret that ocean sailing comes with its risks, and sailing inland largely mitigates these. Firstly, you’re unlikely to experience really rough waters inland. Sure, a strong wind can whip up some waves, but when it comes down to it, you’re unlikely to really be in any danger. Conditions inland just don’t get nearly as nasty as they can out at sea, and capsizing a large boat or drowning are much rarer occurences. And if things do go end-up, you’re never far from the land or other boats.

So hopefully now you’re convinced that inland sailing has a fair bit to offer.  Here are our tips for making the most of it:

Wind Is a Luxury: Figure Out the ‘Wind Map’

One advantage that the oceans have over inland sailing is the fairly consistent wind: it’s either strong or weak, but fluctuations occur over large ranges and timespans.  Not so in inland sailing. The wind can change from one minute to the next, and will even systematically vary over different areas of the water.  The reason for this is that, unlike the ocean, large vertical arrangements such as trees, buildings and hills obstruct the wind, leaving certain areas of the lake all but devoid of it.

You can get an idea of where the dead patches will be by noticing the wind direction and watching out for any obstacles in its path.  However, the fluid dynamics can get complex, and the patches aren’t always where you’d expect – it might be best just to ask fellow sailors where it’s usually windy and where it’s calm.

Don’t Get Stuck On a Corner!

This one applies mainly to yacht racers.  The corners of lakes or reservoirs are sticking points that will really stall your progress.  The reason is that the wind direction changes rapidly and in a corner, you’ve only got two directions to go in. Find yourself stuck there and you may well struggle to get back in the running.

On the wide open ocean, you can see weather patterns coming literally miles away.  Dark clouds on the horizon might spell nightmarish conditions, but at least you’ll have the time to do something about it.

On inland waters, you’ll often not have this luxury. Lakes and reservoirs are often banked by higher land, limiting the visible sky around you. As a result, you won’t see ominous clouds until they’re virtually on top of you. That’s why it’s crucial that you keep one eye on the sky as you sail to make sure you don’t get caught out.

It also pays to do your weather research beforehand, and ask local sailors or boat rental companies about conditions on the water.

That about does it for our inland sailing tips. If it takes your interest, we definitely recommend you give it a go – the safety, convenience and close proximity to other sailors make it an attractive option for skippers new and experienced. If you feel like you need to bone up on your skills before you push off onto the lake or reservoir, then naturally, have a browse of the courses we offer at The Boating Hub.