Posted on February 9, 2015 by Richard Shrubb under Dinghy Sailing, Foiling, Sailing, Yacht Racing Comments Off on Foiling – The Ultimate Goal Of Fast Sailing? 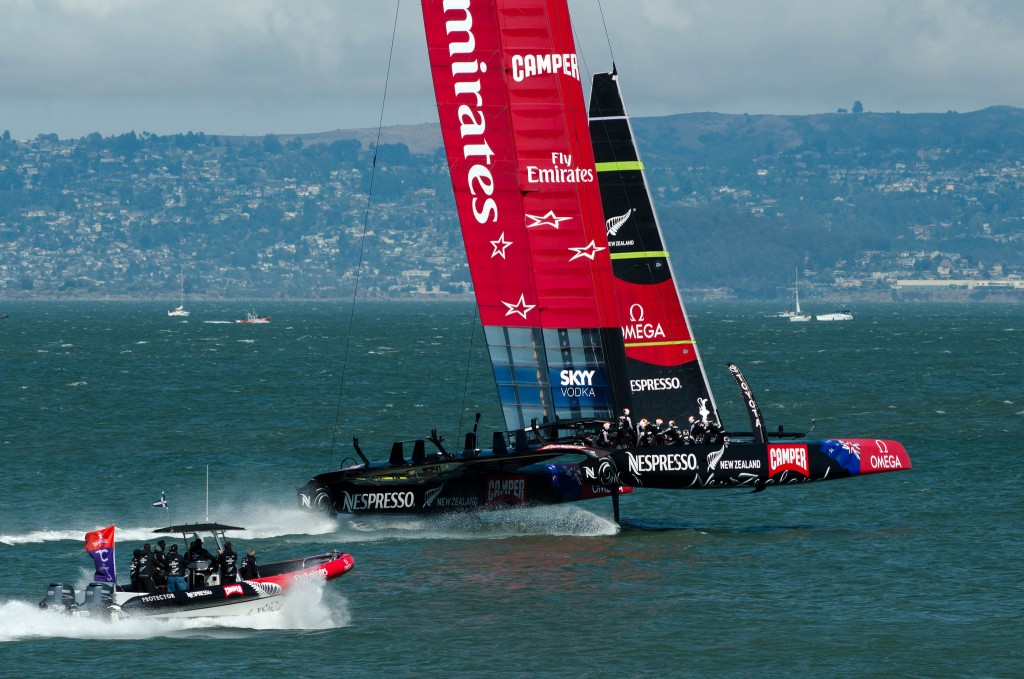 In the last Americas Cup the world was captivated by foiling 72ft sailing catamarans that blasted around the San Francisco race circuit at up to twice the speed of the wind.

Though foiling boats have been around for many years – in the 70’s the Soviet Union began a hydrofoil passenger service through St Petersburg, that continues to this day – hydrofoils have come into their own since the AC72’s captured the sailing world’s imagination.

Even now, for around $4,800 you can convert your Laser to foil at your sailing club!

Since the turn of the 1900’s, people have realised that planing boats go faster than displacement boats.

If you’re learning to sail dinghies, you will likely sail a Topper Pico that has a flat bottom, and is designed to sit on the surface of the water at speed – you will know all about it when the spray from the hull on the water moves toward the back of the boat and you accelerate noticeably. Even all out ocean racing boats are designed to plane at speed, with only the rudder, daggerboard and keel in the water.

The classic planing boat is the RIB that is used as the rescue boat for sailing clubs all over. You will find that getting it going ‘on the step’ requires a fair bit of throttle, but once planing, you can throttle back and still achieve greater speeds than as you accelerated to get planing.

Planing is all about reducing friction. Put simply, a vessel with a lot of hull under the water has to push the water out of the way as it moves forward. Water is 1000 times denser than air, so it must push very hard to achieve anything at all.

The idea of getting your boat to plane is to only have the control surfaces in the water, with the hull sitting on top rather than in the water itself. From having to push lots of water out of the way to move ahead, you push very little and go so much faster.

Planing boats still have friction with the water on their hulls. On a 3ft wide, 12ft long boat, you might have as much as 36 square feet of hull in contact with the water. Foiling hulls are about eradicating that friction altogether.

The idea of foiling is to eradicate the friction of the hull on the surface of the water. You will only have your control surfaces in the water while foiling.

Where the AC72 foiling catamarans might have had 288 square feet – or more – of hull in contact with the water while planing on both hulls, with one winged foil and a rudder in the water they may only have as little as 20 square feet of control surfaces in the water whilst at full speed. Considering the raw power of their huge sailing wings, this enabled them to literally fly at twice the speed of ‘true wind’. 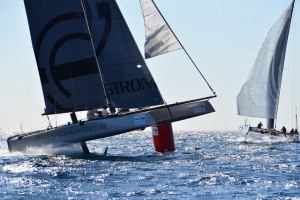 I’m a beginner – what has foiling got to do with me?

In the next decade, foiling boats will become so popular that people won’t turn their heads when they see one fly by.

Since the last Americas Cup, a huge range of foiling vessels have started to filter into the market.

There are a number of classes of foiling catamaran that race on European, US and Pacific waters. Foiling kite surfers have become so ubiquitous that in the world championships they have their own class!

I have no doubt that major sail training organisations such as US Sailing, the RYA and IYT will start offering foiling courses as part of their packages, much as they offer training in working on a trapeze or trimming an asymmetric spinnaker now.

Where the foiling Mk2 Moth is so hard to sail that you have to be a brilliant sailor even to get it moving, you can already make a modification to the Laser sailing dinghy to allow that to foil for around $5,000 or £3300.

If you are a motor boater, you can foil too! A South African company builds a range of foiling RIBs that can be used for anything from high speed, yet fuel economic cruising to all out speed machines. One was used as the press boat for Key West Race Week in January and unlike many of the traditional RIBs had no problem keeping up with the fastest sailing boats there.

So, what’s the future of foiling?

If like me you enjoy plodding around the buoys at the weekend, but follow elite sailing as other people do soccer, elite sailing foiling technology is going to rocket soon. A new foiling IMOCA 60 is being built for the next Vendee Globe singlehanded round the world race so even monohulls are getting in one the act.

What if you’re an ambitious youngster with the need for speed? In my day the ultimate boat was the International 14. Now, that is the GC32, Moth, Flying Phantom or foiling kiteboard. You never know where your sailing career will take you, but the brightest and best are looking at foiling boats!